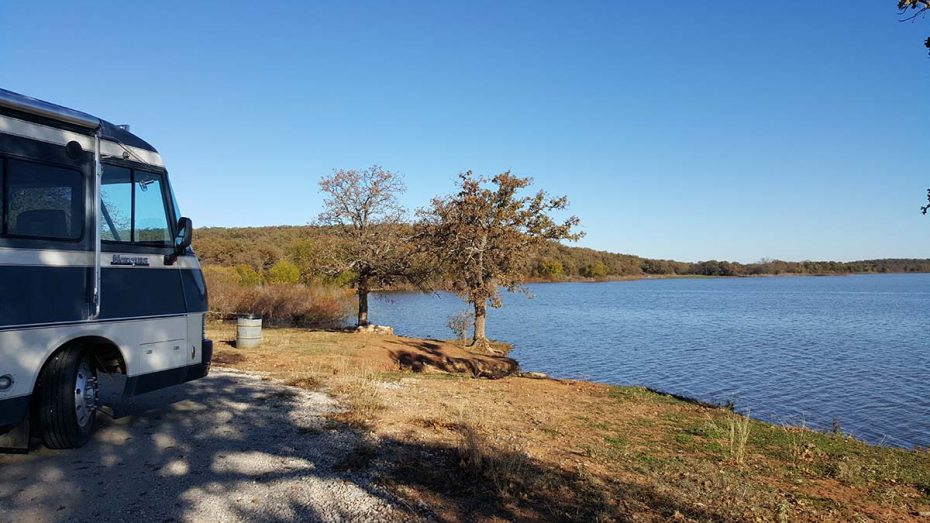 We had an invitation for Thanksgiving with friends in eastern Texas, but we still had almost two weeks to make our way across that very large state.

Our first stop in Texas was a Florey County Park, between Andrews and Seminole, Texas.  When we pulled in, we found we were the only campers in the entire park.  The hosts told us it used to be packed to the brim all the time, but with the oil prices down (crashed out the bottom) a huge number of people (oilfield workers) had been laid off.  Where there used to be housing shortages and every possible RV spot was filled, there are now only empty lots.  We had the place to ourselves the entire 5 days we were there, except for Sunday afternoon when a large contingent of Mennonites came for their monthly social gathering. Duke and George really liked it because they were free to roam around on their own (except when the church folks were there).

There were a couple of oddities about that park, though. First, the sign on entering: Our first night we were woken up with the most incredibly AWFUL smell; it was one of the worst smells I’ve ever had to endure for any period of time (30 minutes or so) in my whole life. If it weren’t for the fact that no one seemed to be making a fuss (like evacuating us), we just stuck it out. In the morning, I did a little investigating.  Turns out that just behind the trees (where you can’t see it from park) is an oil refinery, and it has a byproduct of hydrogen sulfide (H2S). According to Wikipedia, hydrogen sulfide occurs naturally in the body, the environment and the gut, so low levels are completely safe.  However, at higher levels (200 parts per million or so) it’s highly toxic. I asked the hosts about it – there’s an alarm that goes off if 10 ppm is reached. The smell is noticable (and awful) at about .001 ppm … way, way, way less than the danger level (but still incredibly stinky!) .  Good news is that on subsequent nights it wasn’t bad at all.

Then there were the other warning signs scattered throughout the park: We checked with the hosts to see whether the rattlesnake sign was just precautionary, or whether we should be worried – especially about Duke deciding the poke his nose where it would get bitten.  Turns out the host had been there for several years and never seen a snake outside.  He did corner a rattlesnake in one of the toolsheds, but that was it.  We were careful, but didn’t see any signs of rattlesnakes, or snakes of any kind for that matter.

The big excitement there was The Storm (capitalized, mind you).  Jere grew up in Texas, so he knew about the storms, but I’d only ever seen them when covered by the Weather Channel.  One evening, just as it was getting dark, we saw the thunder clouds heading in from the south.  The bus was facing right towards them, so we sat in the driver and passenger seats to watch the show.  I even made popcorn!  The clouds got darker and darker and then the lightning and thunder started.  It was magnificent; Mother Nature at her angry best.  Since it was dark, we could only see the outline of the clouds when the lightning lit up the sky.  It was when we briefly glimpsed what looked like the beginning of a funnel cloud that it all started getting a little too real. Weatherbug showed the storm splitting in two and passing right around us.  We got about 2 mintues of hail and a little rain – but other than that it was just a great show.  However, the area around didn’t fare so well.  Turns out that there were 9 tornado touchdowns in Seminole (just to the northeast of us).  Some were within just a few miles of where we were parked.  Someone was looking out for us!

We decided on a little detour to see if Jere could find his father’s gravesite. I checked www.findagrave.com and found his father’s burial site in the Wolfforth Cemetery, just south of Lubbock.  A few hours drive and we were there, trying to find it.  Even though the cemetery is small, it took us almost a half an hour to find it.  Not surprising since it was nearly completely covered.  Jere cleaned up the headstone a bit just because. Our next stop was Snyder, Texas, where Jere spent some of his growing up years.  We located the shop that his father built and the owners were kind enough to let Jere snoop around.  It was different – yet still somewhat the same. Jere in the doorway of the shop his father built ca 1954.

We also stopped at the Library to see what we could find out, and Jere found a high school year book in which his oldest sister was pictured. Next we went to the local newspaper office and did some sleuthing on old microfilm reels.  We found a small mention in the November 16, 1952 Snyder Daily News “Hospital Notes”

After the newspaper and library, we checked the courthouse to see what we could find there.  We found Jere’s birth certificate (and got a copy) we also found his parents’ divorce records and, a big surprise to Jere, a marriage and divorce record for another wife he didn’t know his father had married! You just never know what you’re going to find.

All in all, it was a good and successful family research trip to Snyder.

In the late afternoon we headed out, boondocking another night, this time in a parking lot next to a USDA office in Roby, TX. It was a very nice, flat and well maintained parking lot — our government tax dollars at work.

It was just a short hop to Breckenridge; we went (courtesy of Google Maps) directly to the Breckenridge Cemetery where we had determined that Jere’s Grandfather (and other family) were buried.  Despite having the lot number from FindAGrave.com, we were unable to locate the plot.  Since it’s a city cemetery, we took a short drive to city hall where the knowledgeable ladies dug up a cemetery index and map and helped us find the gravesite. Skipping back to the cemetery, we did find it – and several other Matlocks and related family as well.  (One of these days I’m going to get Jere sufficiently interested in Genealogy to actually start keeping track of these things he finds!)

After several days of moving about and staying in parking lots, it was time to find a place to settle down for a few days.  Selma Park, in Bowie, Texas was just the ticket.  On a lake, quiet and secluded (not many people wanting to go in the lake in late November) – it was perfect.  The picture at the top of the page is our site on the lake.

Our plan to stop in Paris was just to stock up on some supplies, fill up the diesel and propane tanks and dump our black and gray water.  But, when you are in a town that boasts a miniature Eiffle tower topped with a cowboy hat, what could possibly keep you from checking it out?  Seriously, how cool is that? While there we decided to take in a movie and ended up staying the night in the Cinemark Movie Theater parking lot (thanks to the Manager for giving us permission).

Finally, we reached our last destination for November – the 6T Ranch, the home of good friends Jackie and Stan Thompson and their family.  They had kindly invited us for Thanksgiving and after three months on the road eating food from restaurants or cooked in our weensy-teensy-tiny kitchen it was looking like Heaven! Duke on the last part of the driveway to Jackie and Stan’s house.

We arrived a few days before Thanksgiving and Jackie found us a nice spot in front of her soap shop.  We had power, water, shade, privacy and a bathroom inside … what more could one ask for!  We also had access to the shower (a marvelous shower with one of those huge rainheads and plenty of hot water) in the upstairs of her house. We spent a couple of days working (although Jackie did try her best to distract us with activities!).

Thanksgiving was very nice.  Plentiful food, lots of family to meet. Casual leftovers for several days (I LOVE Thanksgiving leftovers!).  I got to know Jack, Jackie’s grandson, enticing him into conversation over my glow-in-the-dark watch.  Then I completely betrayed the friendship by spending time teaching his sister, Emily, how to knit.

We stayed on for several days after everyone else left.  We had a great tour of the ranch property.  After driving across West Texas and all the things I’d heard about Texas in general, I was very surprised at how beautiful East Texas is. One of the many beautiful spots on the 6T Ranch.

You can tell really good friends when they help out in stressful and unpleasant times.  Jackie and Stan both surpassed typical friendship levels when Duke chased after and was sprayed by a skunk – at close range and directly in the face. Repeatedly. They made their dog kennel available and both helped – hands on – in the cleanup process.  Stan, bless his heart, was right there with Jere in the kennel in near-freezing weather washing Duke with soap and tomato juice and baking soda.  Poor Duke! He was freezing, but cooperative in trying to get rid of the stink.

Jackie helped with the drying; we destroyed several of her towels and I don’t think the smell came out of any of our clothes for at least 5 washings.  Her laundry room reeked for days, and she never complained one little bit.  That all qualifies as truly “above and beyond!”

At the end of November we were still hangin’ out at the 6T Ranch, making our plans for December.